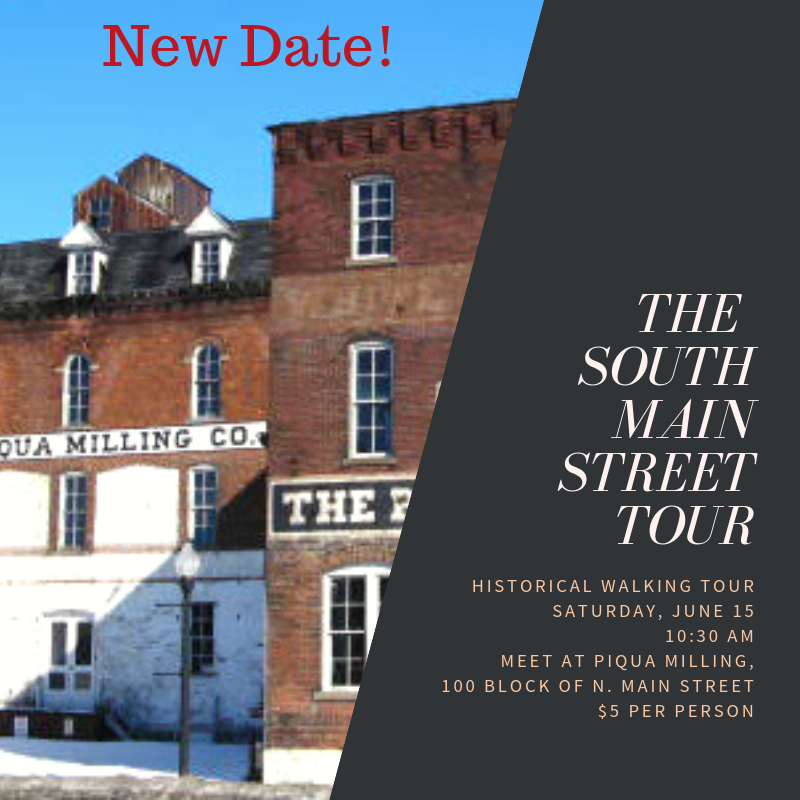 The Piqua Tourism Council, in cooperation with the Local History department of the Piqua Public Library and Mainstreet Piqua, have teamed up to offer guided historical walking tours.

THE SOUTH MAIN STREET TOUR
Saturday, June 15, beginning at 10:30 in front of the Piqua Milling Building, 100 block of North Main. (This tour was originally scheduled for mid-April but was rained out. This is a rescheduled date.)
South Main began as an early Native American Trail which slowly became a trade route for early pioneer settlers as it paralleled the Great Miami River.  Taverns, mills and tanning yards stood next to brick Federal and Greek Revival style homes.  By the 20th century, Queen Anne homes were sharing space with neighborhood groceries, bakeries, casket carvers and blanket makers.  South Main Street has long been one of the historic main entrances into Piqua.

THE VICTORY HEIGHTS AND CLARK AVENUE TOUR
Saturday, September 21, beginning at 10:30 at the Pitsenbarger Statue off of McKinley Avenue.
Victor Heights was a World War II housing complex and Clark Avenue holds many additional homes from that era.  From brick bungalows built into the hill to the addition of asbestos and cement shingling (Glatex), the war made a huge impact on Clark Avenue housing.  At the bottom of the hill, war industries such as the Wood Shovel & Tool Company and the Meteor Motor Car Company provided full employment to Clark Avenue residents who had just recently been suffering through the Great Depression.

THE FINE ART OF DYING IV TOUR
Saturday, October 19, beginning at the State Route 66 entrance into the cemetery.
This tour will take in areas not covered before and provide an insight into the burial customs and artistic carvings used in Piqua.  The symbols used in the nineteenth and early twentieth centuries such as the lamb, the rose and the urn will be reviewed and explained.  The cemetery is a place of traditions and innovations, of massive memorials and small remembrances and examples of old world markers and new world adaptions.